Vince: Mecanikill? is the harsh experimental industrial project from Raleigh and Charlotte N.C. that uses all sorts of unconventional noises from everyday life sampling, arranging and then turning the sounds into music. We are also very heavily into using visuals that Kat creates to go along with the music and dig deep into the minds of the audience while playing live as I feel they both go hand in hand.

Vince: I started the band with my wife Kat about 6 years ago. Doc Hollow from Headstone Hollow has been involved with Mecanikill? in numerous aspects for about 5 years and now plays guitar full time in the band, Ben Davis joined up with us about 2 years ago and now Arnold Schumacher from Wretched Martyr has been with us for about a year.

Vince: I was originally going to call the project Mechanikill and Kat said “Why not do a strange wordplay with the name where people question how it is pronounced?” so we came up with the spelling of it as Mecanikill?. There is nothing else that I have yet ran across that is spelled like that and it really sticks out and is remembered when seen so we went with that name for our band.

Vince: I have been into music since a very early age. My childhood consisted of many nights sitting around playing piano and the organ with my Grandparents and without them I doubt I would have the love and appreciation for music that I do now. Even later in life I would still go over and jam out with my Grandfather on a regular basis. When I was in High School I started singing and playing bass in punk and death metal bands but always wanted to do something different but yet still retained the heavy and aggressive sound aspects that I still enjoy listening to. I was introduced to My Life With The Thrill Kill Kult, Aphex Twin, Nine Inch Nails,Throbbing Gristle, Bile, Ministry, Skinny Puppy and a slew of other industrial acts that really opened up my eyes and ears to the world of electronic music that was happening around me and sounded so much different from anything else that was going on at the moment. I instantly knew that was the direction I would move towards someday.

Ben: I started playing guitar when I was 10. I really got into electronic music after hearing Warp artists like Aphex Twin, Autechre, and Squarepusher.

Vince: About 5 years back I started getting into modular gear. I always loved the sound of vintage synths and was fascinated by c.v. and would ask all the musicians I knew about it but very few knew anything about it at the time. I started picking up some Metasonix gear along with a Kenton midi to c.v. converter and experimenting with that and one thing led to another. Now I have a wall full of modular gear that can be integrated with all my digital synthesizers and drum machines by using the A.C. Instrument Interface module. I really enjoy being able to use my existing digital gear along with my analog system to breathe new life into it. It really opens up so many more sonic possibilities by being able to process anything even samples of everyday noises into my modular rig.

Ben: I started my first modular system in 2009 which was a synthesizers.com entry system. In 2010 I fully switched over to Eurorack. I like modular synths because of the infinite possibilities. You learn something new every day you use them and there are always new sounds to be discovered. 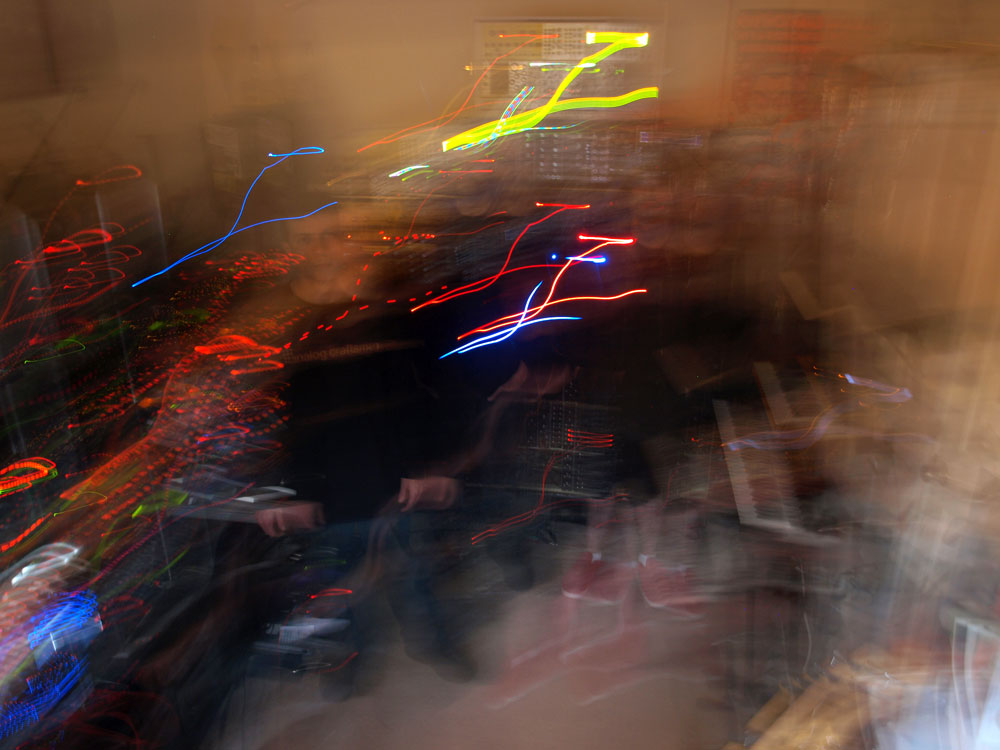 Vince: I usually start off trying to patch up some beastly sounding leads to play but a lot the times I will end up for hours on end just making and tweaking insane noises then sampling them into my Korg ESX, sift through them to find just the right noise I am looking for and work that into our songs from there. Using a modular synthesizer has endless possibilities and that is one of the things I love about it, there are no boundaries or constraints of being locked into a grid of how you can create sounds. Being able to patch things up in unconventional ways leads to creating noises that you would not be able to do on a digital synthesizer.

Ben: I use it a lot as an effect with my drum machines, synths and line out from my audio interface. I rarely play it as a keyboard synth. I’ll normally get a patch to a certain point then sample it and cut/arrange it further from there.

Vince: Probably my Korg Electribe. I use it to sample and sequence so much stuff. It has an immediacy about it and provides me to have a fast and easy to use canvas for what I am hearing in my head and enables me to easily get things done with a quickness before I forget the melody of what I was going for.

Ben: My Doepfer A-101-3. It’s a 12 stage vactrol phaser. Other than being an amazing phaser it’s one of the best distortions I’ve ever heard. It’s a very versatile and unique sounding module with lots of patch points.

Vince: That’s a hard one…I would have to say that the Arcade is one of if not the best hands on utility module I have ever used. I love it so much I bought 2! I enjoy the ability to control my gear in a nontraditional way and that is exactly what it does and is great for controlling gear in a live setting with three independent trigger buttons and a joystick. As for non utility modules it would be a very hard choice between the Arp filter and the Polivoks filter. The sound of the Arp filter is so lush, juicy and perfect for when I need just a touch of filtering done to a sound but still have the option to get crazy and create some wild resonance with the Q opened up and the Polivoks filter is just plain destruction in a module with a filthy sound all of its own. I also really like the Polivoks Mixer module too as it adds some great harmonics to whatever you run through it. I would have a hard time to choose just one between them as I love them all and can’t imagine my system without them. Everyone needs one of these in their systems as they have their own unique flavor!

Ben: My favorite A.C. module is the Arcade. It’s perfect for triggering and controlling multiple modules. Great for live use!

Vince: I think anything a person gets into can be expensive it’s just a matter of self control and researching the items you want before you buy. If you look at how much a Moog Voyager costs and do a comparison to getting a 5U system in my opinion you will find that you would get a lot more bang for the buck out of a 5U modular than the Voyager for the same price. You can also tailor build your setup to have the exact sound of what you are going for with a modular and do it one piece at a time so you don’t have to spend thousands just to get going. You could easily start off with a oscillator or filter and get right down to making noise then and there. It’s a lot cheaper to add a module to your system and you don’t have to cough up thousands at one time. If you have a income and save anyone can afford it just maybe not all at once! Another great thing is that the prices on modules do not lose their value like when you buy the newest big name synthesizer and it is easy to trade modules with other people as they are small and easy to ship. My suggestion would be to start bare bones with a oscillator, e.g., amp, l.f.o. and filter. It costs the about the same price for those as a new MicroKorg and then add more as you figure out exactly the sound you are going for. It’s like a big puzzle that you can create you own image with when you put together your own setup.

Vince: The forum Muff Wiggler (http://www.muffwiggler.com/forum) is a great place to start. Read all you can to get a basic understanding about how modular synthesizers work first and then start to experiment with patching up modules and routing them in ways that a normal synth will not allow to be used. For me the choice of 5U was an easy one I love the ascetics, build quality, bigger knobs and enjoy the whole aspect of not having to convert my cables from 1/4″ to 1/8″ so that I can just plug in my existing gear and go at it. Plus I think it looks really kool having a giant Death Star wall to use for making music!

Ben: I would recommend building your system one module at a time so you have a better understanding of how each thing works. Start with things like oscillators and filters so you can start making sound right away, then add VCAs and modulation modules later on.

Vince: Everything is cyclical in this world and I am very happy to see the current resurgence of people making music the old school way with c.v. and modular synths again. Many thanks go out to Tony for breathing new life into rare and expensive vintage designs making them attainable again for the normal person to afford and pushing forward by building such interesting, new and unique modules for musicians to use. We are living in one of the greatest times to create music having the best of both worlds (digital and analog gear) that allows us to open up the doors of our creativity with no limitations of what can be achieved. If your mind can imagine it you can create it! 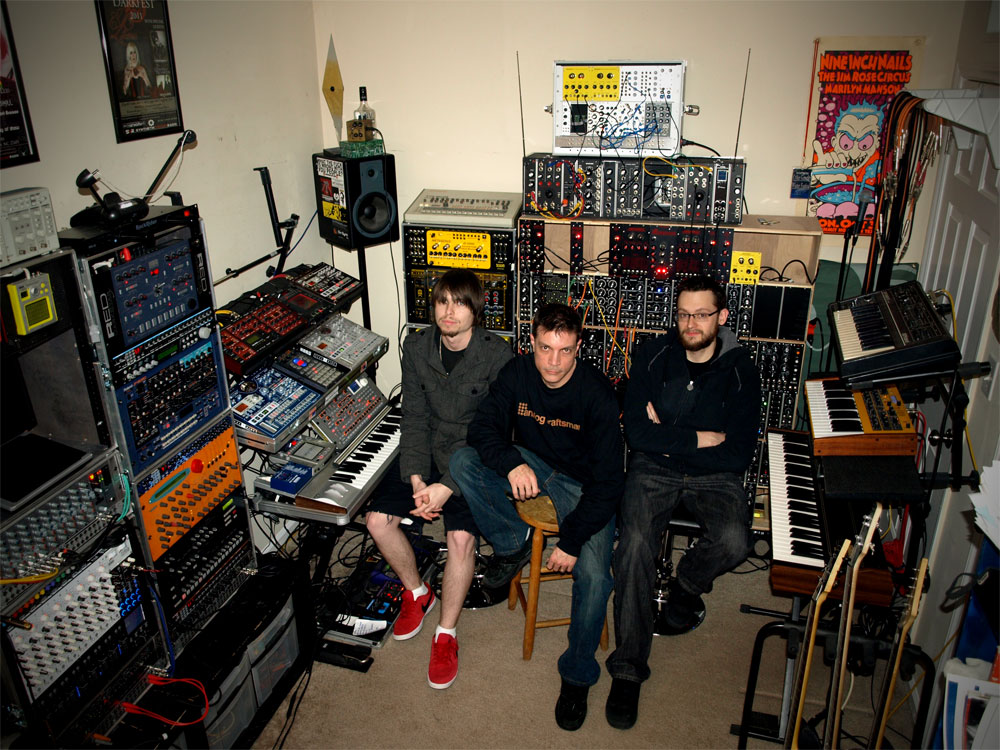